"Joe's voice is an absolute treasure!"

"His range and style is just incredible!"

"That man can PLAY!"

"Down to earth AND crazy talented!" 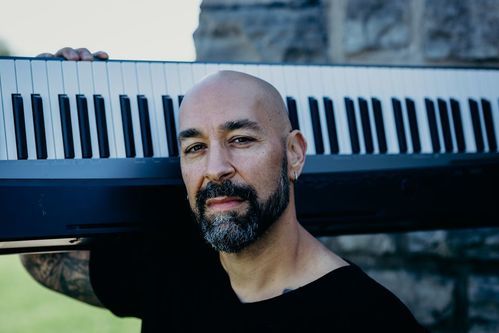 DO YOU KNOW JOE?

Joe Altier has been singing and pounding piano keys since he was 5 years old! Embracing artists from every genre, from Frank Sinatra and Otis Redding to Garth Brooks and Metallica, his musicality and repertoire is simply astounding!

Joe's calling came when he assumed lead vocals for the rock band Brand New Sin. Three albums later, they headlined with major acts across the US & UK, were featured in the motion picture "School of Rock", on MTV, ESPN, and even the WWE, when famed wrestler The Big Show tapped Joe's soaring vocals for his entrance song, "Crank It Up."

Now, with over 5,000 performances throughout Upstate New York since 2008, he continues to reunite with his band to sold out shows and was invited by the producers at NBC to audition for 'The Voice', winning CNY's Best Male Vocalist Award for SEVEN years running!

And now with his new weekly podcast on K-ROCK, fresh cover songs released every single day on social media, and a dedicated live stream everyday on TWITCH --now more than ever-- he's so much more than JUST JOE!

Read an article about Joe here.

Joe's songs are on every platform plus weekly releases on Facebook! Koozies, T-Shirts, shot glasses and of course CD's right on on Shopify!
DOWNLOAD COVER SONGS
SEE THE MERCHANDISE

•  JOE SURPRISES YOUR LOVED ONE WITH A SONG!

Own or run an establishment? Reach out to Joe directly for pricing and availability
EMAIL JOE

All proceeds go directly toward Joe's Daughter's College Fund.  Thank you for your generosity!

Many are the blessings and challenges of being a working musician. From the outside, it looks like financial freedom, not having to work for the man, and just a lot of fun. But in reality, nothing could be further from the truth!

Working for yourself, in the medium of music no less, means little to no time for family, socializing, even yourself! Between rehearsing, promoting, networking and performing, it often means 16 hour days, 7 days a week.

None of it is possible without support from my fans, my friends, and my family --who let me do what I love and make a living doing it. So please, support local music! We make up the soundtrack to your life, just as you do the same for mine!  ...and I am so grateful!